Evaporation process may be defined as a process in which aqueous solution is concentrated in a vessel or group of vessel in which concentrated solution is the desired product and indirect heating (usually steam) is the energy source.

Evaporators can be arranged in forward-feed, reverse feed or parallel feed. vapors of the previous stage is the energy source for a next stage .

The efficiency of the evaporators can be increased by arranging number of evaporators in series.

Following are some of the basic terms used in the evaporation process.

In single effect evaporation process the dilute solution which is to be concentrated is contacted only once with the heat.

Multiple effect evaporation is the process of evaporation in which the vapors coming out in the one stage is used as an energy source (as a heat) for the next stage.

In short, vapors of first stage are used as energy source for the next stage. 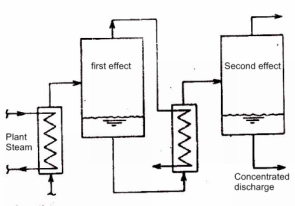 Economy of evaporator may be defined as the amount of steam used and is expressed in pounds of vapors produced per pound of steam supplied to the evaporator train.

Capacity of evaporator is measured in terms of its evaporating capability.

It is the pounds of vapor produced per unit time.

In evaporator if the feed and steam follow parallel path (i.e. in same direction) through the evaporator train.

The feed and steam enter the evaporator train at opposite ends.

If you like this article, please share it with your friends and like or facebook page for future updates. Subscribe to our newsletter to get notifications about our updates via email. If you have any queries, feel free to ask in the comments section below. Have a nice day!